Since mid-1990s, the RTK method has become popular in land surveying and precision farming. RTK systems process code and carrier-phase observations to enable high-precision relative positioning.  The RTK method relies on end-users gaining real-time access to corrections from a base station with precisely known coordinates. Base station corrections provide solutions with centimetre-level precision to rovers found within a 10–20 km radius. The communication between users and base is usually established via cellular Internet or radio modem.

An RTK system involves three main hardware components: a base station, a rover and a real-time communication link (see Figure 2). The rover unit estimates coordinate differences (DX, DY, DZ) by applying corrections or measurements transmitted from the base station. The accuracy of RTK depends on the distance that separates the rover from the base station, but is of the order of 1cm + 1ppm in most instances. 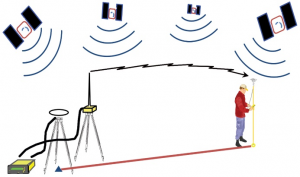 Maintaining lock to the carrier-phase measurements is key to obtaining centimetre precision. This is because the phase ambiguities of the carriers must be resolved to their correct integer values. Ambiguity resolution sets the integer number of cycles between the receiver and the satellite revealing the millimetre precision of this observable. Ambiguity resolution requires an initialization period that is typically less than a minute for rovers within 10–20 km of a base station. Two common approaches to ambiguity initialization and resolution are:

In known point initialization mode, the user remains on a point with known coordinates until a fixed ambiguity solution is obtained. The kinematic survey can then be started.  In OTF mode, the fixed solution is obtained while the receiver is in motion. During RTK operations, it is necessary for users to monitor the integrity and the continuity of data from both the base and the rover stations, and also the reliability and latency of the communication link. RTK users must also be familiar with environmental factors that might degrade the precision and/or the accuracy of their solutions.

In recent years, commercial network RTK (NRTK) services in areas of significant economic activity have reduced the need for end-users to install base stations. Relying on a reference network instead of a single base station also reduces concerns about single station outage and base-to-rover separation as long as users remain within the network perimetre. With reference stations strategically distributed, NRTK services can meet the high accuracy real-time positioning requirements of users distributed over large regions. For optimal performance, a uniform distribution of reference stations with spacing that optimizes the modeling of regional atmospheric delays over the service area is preferred. The architecture of NRTK surveying consists of four following segments:

In Canada, NRTK services have gained popularity over the past decade as reflected by a tenfold increase in the number of reference stations https://webapp.geod.nrcan.gc.ca/geod/data-donnees/rtk.php?locale=en.  Access to wireless cellular communications has determined to some extent the area of NRTK availability in Canada, which is concentrated along the southern border.  The main benefit of NRTK over RTK is that it improves the precision, availability and reliability of corrections by eliminating the single-station point of failure and providing redundancy for network-level quality control. As NRTK and RTK are relative positioning methods, users should verify that the coordinates assigned to the reference stations used to estimate corrections are in the reference frame they desire or can be transformed to the local coordinate system in which they work without loss of precision.  When the NAD83 (CSRS) reference frame is specified, it is also important to ensure that the proper realization epoch is identified.